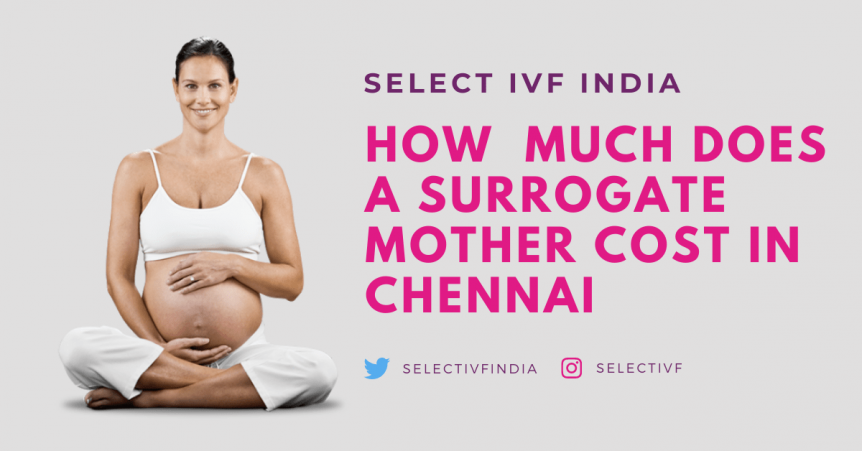 If you’re wondering how much does a surrogate mother cost in Chennai we’re here to help you clarify some questions.

The laws of India forbid commercial surrogacy, which includes paying the surrogate monetary or other compensation in exchange for pregnancy.  even then in certain conditions enumerated In the surrogacy regulation bill (2019) allows it in certain conditions such as prove long term infertility of the married couple. Among the medical expenses taken care of by the couple, the would also be expected to pay a fee to the surrogate mother in addition to her needs and nutrition.

A couple has full freedom to pick their surrogate as long as she meets the criterion and is healthy (mentally and physically) to carry a child. if the surrogate brought forward is a close relative or acquaintance of the couple, they only would be required to bear the expenses of her medical and pregnancy and no cost of surrogate mother would be paid. Although, if the couple seeks the help of a fertility clinic to arrange a surrogate for them the surrogate fees would need to be paid. During the initial consultation, the total cost of the surrogacy package is calculated and parts of it are used to pay for the various services you would be employing. The average cost of the package offered would vary based on location, expertise, services and success rate of the fertility clinic you’re approaching. On average the cost of surrogacy packages range from 10 to 20 lakhs INR. Few fertility specialty clinics offer 100% “take baby home” packages where a sure shot success is promised to the commissioning couple, and costs a bit more. These services include the services the surrogate provides.  The average cost of a surrogate mother in Chennai is between 3 to 5 lakhs INR. If artificial insemination or embryo transplant is employed to impregnate the surrogate, the package might include the cost of multiple attempts at achieving it. However, this will not affect the cost of surrogate mother. Fertility and surrogacy clinics in Chennai hold a database of approachable surrogates and the cost of the surrogate is likely to be included in the surrogacy package offered. Select IVF India offers affordable surrogacy packages for couples that seek their assistance. The surrogates suggested by our Centre are completely scanned for health and reproductive issues beforehand.

When a woman consents to give birth to a couple’s child needless to say she’s doing the noblest favor to them and the joy of parenthood cannot be bought, although the surrogate mother needs to be given a steady amount of money to keep herself and the life inside her well-fed and nourished. This is achieved by giving a monthly allowance to the surrogate by the intended parents. This does not allowance covers for the food, fruits, medicines and supplements the mother needs to take to have a healthy pregnancy.  the payment of the surrogate is done to compensate for the efforts she put in the pregnancy as well as seen as a token of gratitude on behalf of the couple.

The total cost of the surrogate is negotiated with the terms of pregnancy in the beginning. The decided amount is then given to the surrogate mother in phases with the majority share given to her the at the time of birth. Not to confuse the commissioning parents the nutrition required and other necessities of the pregnancy are to be taken care of by the parents separately and has is different from the surrogate fees.

Out of the two types of surrogacy procedures possible altruistic and gestational, gestational is currently more popular and expensive. Traditional surrogacy involves artificially inseminating the surrogate’s egg with the intended father’s sperm, making the surrogate the biological mother of the baby. Since it includes fewer steps it’s inexpensive and is opted in case the intended mother is unable to contribute eggs for fertilization. Gestational surrogacy involves the eggs and sperm of the intended couple (or donor If involved) and is not the biological child of the surrogate. Select IVF India offers healthy egg and sperm donation as well as affordable IVF facilities with an appreciable success rate.

In this procedure, the embryo formed is fertilized in a laboratory setting and then implanted in the surrogate. The recent amendments made in the surrogacy bill by the ICMR in 2019 was made to stop the commercialization of surrogacy and exploitation of poor surrogates in the hands of big fertility clinics. The new surrogacy bill prohibits the involvement of surrogate’s eggs for fertilization to avoid emotional attachment to the newborn. Thus only gestational surrogacies are recommended by the fertility clinics. This process for the involvement of IVF costs a little more.

After suffering a lot of backlash for being called a “renting the womb” business which was very lucrative and unregulated. An attempt has been made by the medical council in India to protect the surrogate mothers from exploitation but also fulfilling the dreams of couples who have been unable to have a child for years. The regulation of commercial surrogacy allows the surrogate to be compensated for her kind work and makes a couple happy.

Select IVF has a maintained reputation of not only taking care of their patients but also have immense care for our registered surrogates. The surrogates that join with us are looked after not only physically but also mentally. Unlike most heard of clinics that don’t pay the promised cost of surrogacy to the mothers, we make sure the promised amount is delivered to the surrogate. We value the efforts that the surrogates put into birth the child for another couple and try to compensate them fully for it. If a couple decides to reach out to a surrogate through our network, the terms of pregnancy are looked into well and only after a surrogate understands and agrees to the terms is made to go through the pregnancy. the process encourages the surrogates to involve a guardian to protect their interests.